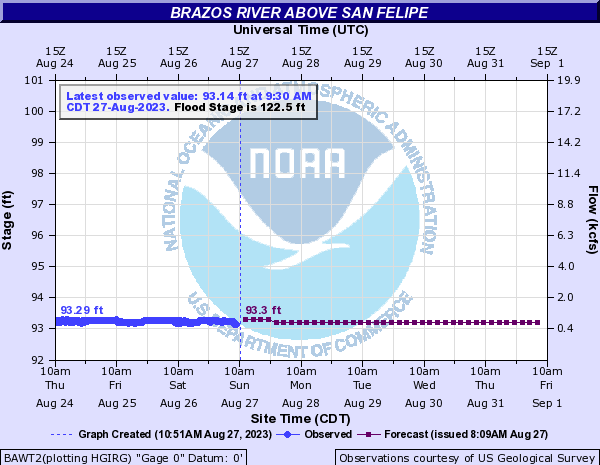 The biggest issue facing communities and residents upstream and downstream of gauge/forecast points is the inconsistent spacing of gauges. In a perfect world, we would have 1,000’s of additional forecast points; however, due to limited funding, gauge maintenance, and safety concerns at gauge points, it is a challenge. To compensate for the lack of convenient gauge locations, communities have to rely on historical flood data, hydraulic models, or a combination of the two to calculate water elevations at specific locations outside of the forecast points.

For areas were historical flooding records are outdated or missing/incomplete, communities have to rely on hydraulic models that are based on hypothetical, or design, storms. For many, the FEMA effective hydraulic models that were used to create a community’s Flood Insurance Rate Maps (FIRMs) are the best available data. For Fort Bend County, our only published models for the Brazos River are the FEMA Effective Models that were finalized in 2014. These models created flood profiles for the 10% (10-year), 2% (50-year), 1% (100-year) and 0.2% (500-year) design storms.

When the WGRFC publishes a forecast at Richmond, the communities can use these flood profiles to estimate what the Brazos River crest elevation could be in order to determine the impacts to the community and aid in any type of warnings or evacuations. Using Harvey as an example, the table below is a summary of the estimated and observed water elevations at the major bridges in Fort Bend County. This is based solely on using only the hydraulic model data.

The major downside to using FEMA hydraulic models is the accuracy of the model based on its age and changes to stream or watershed. Due to FEMA’s process, the Fort Bend County effective models were published in 2014 while the data included in the models were developed from 2005 to 2007. Since 2007, we have seen a severe drought and several high water events on the river, including 2 record floods. Droughts as well as flood events can potentially change the dynamics of the River. To enhance forecasts, communities can supplement the hydraulic models by using the recent record floods. The table below is the revised Harvey table based on using a combination of the FEMA models and recent events.

As shown in the table, using the recent records can increase the accuracy, but as seen, it can actually decrease it in some cases. This is because every flood is different and every previous flood can change the dynamics of the River for the next flood. Where the rain falls, the intensity of the rain, and the velocity of the flow in the River all have a major impact on forecasts which change from storm to storm. Communities along with their staff and/or consultants work together each event to develop the best forecast with the information that have at the time.

Currently their are two studies in development that are evaluating the Brazos River. The first is a study being completed by the Brazos River Authority. The study, entitled the Lower Brazos River Floodplain Protection Planning Study, is being funding in conjunction with a Flood Protection Planning Grant from the Texas Water Development Board. The purpose of the study is to prepare a detailed engineering study of the lower portion of the Brazos River from just upstream of Hemptead to the Gulf of Mexico. These models have been calibrated to the major flood events in 2015, 2016, and Harvey (2017). The study will be completed in the Fall of 2018. Once published, we will update this site accordingly.

The second study is being completed by the Fort Bend County Drainage District. As of April 2018, the study has not been started. The Drainage District is currently going through their consultant selection process.