Like all emergencies, flood response follows the basic phases, which are Preparedness, Response, Recovery, and Mitigation. No phase is more important than another as they all have a specific purpose. 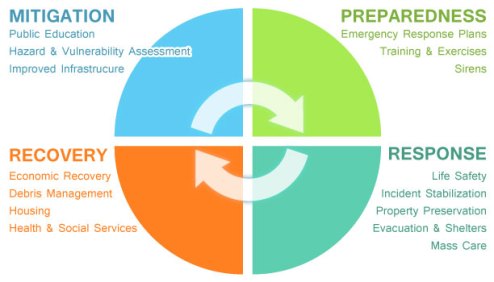 The NFIP was focused on future developed as they related to future flood losses, but had limited funds available to assist communities with existing development as well as updated (increased) flood hazards due to better technology and storm data. The Flood Mitigation Assistance Program (FMA) was established in 1968. This program has grown to be an annual program that is made available across the Country. With over 24,000 NFIP Communities, this program is highly competitive and many communities strong to complete with older communities with more flood related damages. It makes sense that communities that flood annually would be given a higher priority than those that flood once every 10 years.  In 2017, the funding available through FMA is $160,000,000.

In 1968, George H.W. Bush created the Hazard Mitigation Grant Program (HMGP). This program dedicates funds specifically tied to a disaster declaration and are limited to only those States, Counties, and Cities included in the disaster area. This allows Communities to have a better chance of implementing projects to help mitigate losses from future events. We are still waiting to hear how much HMGP funds will be made available for areas impacted by Hurricane Harvey, but the program has allocated $13.8 billion from 1,485 major disaster declarations since 1989.