Coastal Flooding: Coastal flooding is defined as flooding occurring along a coast, which is preliminary from high tides or storm surge. Storm Surge is an abnormal rise of water from storms over and above the predicted tide along the coast. The areas of impact are typically well known; however, the specific impact or damages varies from storm to storm. Some of the most historical storm surge events include:

Flash Flooding: Flash flooding is defined as flooding that occurs quickly (typically 6 hours or less) from heavy rainfall or structural failures such as levee or dam failures. One of the most dangerous parts of flash floods are their impacts at water crossings. Flash floods can quickly hit an area with short notice to drivers and pedestrians and can wash out roadways and bridges.

One of the most notable flash floods that summaries the quick and deadly risk occurred on June 27, 2015 at Philmont Scout Ranch near Comarron, New Mexico. On the morning on June 27 heavy rains created an estimated 20 to 30 feet of water that rushed down towards a campsite being used by Troop 380. 4 members of the Troop, including 2 scouts, were swept away during the event. 3 of the individuals were rescued; however, Alden Brock, a ranger assisting the Troop, was killed as a result of the flood.

River Flooding: River, or riverine, flooding occurs when water leaves the banks of a river, stream, or bayou. Riverine flooding can be caused by many different types of storm events, which include intense rainfall, long duration rainfall, dam or levee failures, snowmelt and ice or debris jams. In 2018, Hurricane Harvey would cause record levels of riverine flooding. In the United States, Harvey caused over $125 billion in damages with 107 deaths.

Street Ponding / Sheet Flow Flooding: Street ponding or flooding is defined as flooding that occurs gradually over time usually after the rain begins or longer. These can be caused by short or long duration intense, high volume, rainfall events that either overwhelm the underground storm sewer or overwhelm the downstream channel or pond that serves a certain area leaving rain water with no where to go. For those of us in the Greater Houston Area, this is probably one of the most common types of floods, which depending on the duration could also be considered flash flooding. The reason that this type of flooding is so common is because in this area, most of the streets are purposefully designed to hold and convey a certain amount of water. 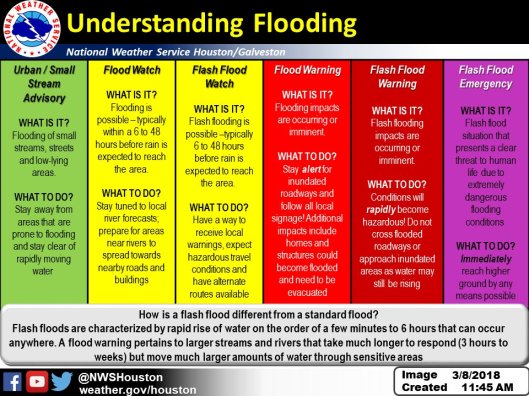 Because we cannot control the exact amount and location of rainfall for each storm event, it is difficult for everyone to know their exact impacts of flooding for each storm event. However, there are some ways people can determine if they live, work or play in a high risk area.

Coastal Flooding: As storms approach a coastline, the National Hurricane Center as well as local partners work together to develop estimates on the heights of storm surges for a particular storm. Many who live on the coast already have an understanding of their risk; however, newer individuals or families might struggle to understand their risks when considering to purchase a new or previously owned home. There are two ways someone can research their risk of storm surges.

Flash Flooding: Flash floods can occur anywhere at any time; however, their most dangerous potential are primarily at low lying road crossings. To best avoid this risk, people have to understand the areas that are impacted by these short duration storms and stay clear of those areas during events. It is not the best indicator, but if you see a depth gauge on a road, it is a good indication of that particular roads risk of flash flooding. Many communities have gone above and beyond to install additional signage and barriers to help prevent people from accidentally driving into these areas.

River Flooding: As a general rule, any river, creek, or stream, no mater if it is natural or man-made, has a risk of water leaving its banks. The severity and the impacts of that water once it leaves is the unknown and varies from storm to storm. In general, the best resource available, outside of visiting with your local community, is using FEMA’s FIRMs to research the flood potential of a particular stream in a certain area as defined by the National Flood Insurance Programs. Please note that being shown in the floodplain on a FIRM does not mean you have no risk of flooding. It only means that you are at a lower risk of flooding than other areas. Visit our Are you in a Floodplain? and Understanding River Forecasts pages for more information.

Street Ponding / Sheet Flow Flooding: As previously mentioned, most of our streets in the Greater Houston Area are designed to hold a certain volume of water before flooding homes and businesses. In general, it is based on 12 to 13 inches of rainfall over a 24 hour duration storm event; however, this amount will vary depending on the age and location of your home or business. And remember, everything has a design that can be exceeded by more intense or longer duration storms.

Many communities have or are developing better tools for helping residents understand their specific risk of flooding. As examples, communities like Harris County and the City of Austin have developed flood warning systems that assist their residents during events. Visit with your local community to learn more about your communities specific flood risks.